Dr. Gadget and Disc-O-Bed on the Hallmark Channel. 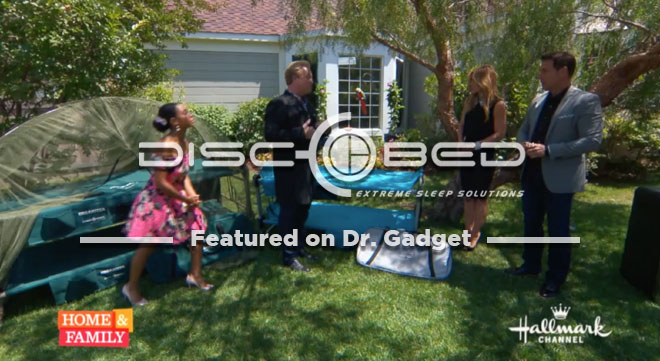 2016 has been a great year for Disc-O-Bed in both digital and traditional media.  One of the most exciting opportunities we had this year came from television and radio personality, Dr. Gadget.  We were lucky enough to have been featured on the Hallmark Channel’s popular morning show, Home and Family.  Dr. Gadget included both the Disc-O-Bed XL and the Kid-O-Bunk in his segment for Father’s Day gift ideas.  The hosts of the show seemed to really like the bunks and had had very positive comments.  Debbie Matenopoulos and guest host Logan Browning were great sports and even tried the bunk.  Both were happy with space and comfort.   Dr. Gadget pointed out that the bunks were perfect for guests and sleepovers in home and for family travel.

Watch the video to see the featured segment that originally aired on June 14, 2016.